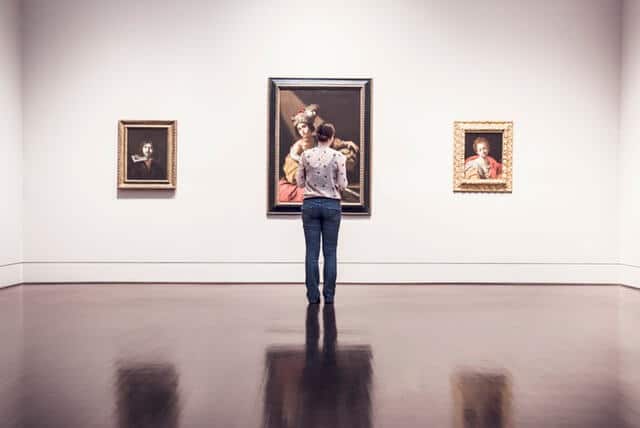 [/vc_column_text][vc_column_text]On August 5, 2012 at 10:32 p.m. Pacific Time the world watched NASA’s Mars Science Laboratory broadcast the landing of Mars rover “Curiosity.” Three years later, that amazing device continues to deliver breakthrough analysis, such as showing that water once flowed on Mars, and demonstrating that Mars could have been habitable at one time.

The Curiosity rover has been a great success, and the University of Michigan has played an important role in this success. One of the key analytical systems in Curiosity that made these findings possible is called the Sample Analysis at Mars instrument suite (SAM). A number of core electronics in SAM were designed and built by the Space Physics Research Laboratory in the Department of Atmospheric, Oceanic and Space Science (AOSS) in the College of Engineering at the University of Michigan.

In order to land on Mars, the Curiosity rover used an unusual sky crane approach to make a landing without kicking up huge amounts of dust. The craft hovered 30 feet above the surface with rocket engines while slowing dropping the rover to the ground. The success of this technique can be credited, in part, to Michigan Engineering students, who ran tests to quantify the anticipated ground erosion during the landing process and gauge its effect on the rover.

Dr. Nilton Renno is a Professor at U-M’s AOSS who has been active in Mars mission technology for years. Renno worked with the engineering students to simulate the Mars Phoenix landing and the effect that the landing would have on surface of Mars and the spacecraft. Engineers at NASA soon approached Renno and requested that he run a similar test for MSL. Renno and his students then constructed a decent model and corresponding experiment to simulate NASA’s sky crane method to land the heavy Curiosity rover safely on Mars.

Before coming to U-M, Dr. Renno worked with Dr. Peter Smith in developing the Phoenix Mars Spacecraft that successfully landed on Mars on 2008. Phoenix’s mission was to explore the subsurface ice by running chemical analysis on the samples it collected. The Phoenix team reported liquid water on Mars, presented as globules that showed up in the images. Some scientists were skeptical, since Mars sees temperatures between -20 and -80 degrees Celsius, and it had been thought that any water exposed to the atmosphere would turn to vapor.

Dr. Renno was the first to theorize that the globules from Phoenix’s images were, in fact, beads of liquid saline water. By this time Dr. Renno was at U-M where he and his team later built a simulation chamber called the Michigan Mars Environmental Chamber (MMEC). Using the MMEC, researchers were able to demonstrate how liquid saline water could, indeed, form on Mars even with its extreme below-freezing temperatures.

“One really exciting outcome,” notes Dr. Renno, “was that we showed that Phoenix discovered liquid water. The findings of Phoenix were somewhat controversial at the time, but our tests were able to reproduce the result and prove that the Phoenix Lander really did discover water.”
The technology of the MMEC has also enabled Renno and his team to further explore the existence of water in other planetary environments.

“People used to think that Mars was the most likely place to find liquid water in the solar system,” says Renno, “but now we are finding evidence of liquid water virtually everywhere. We are now using our chamber to explore the formation of liquid saline water in more extreme conditions, such as the outer solar system.”

DEVELOPING A FORWARD-LOOKING CULTURE
Renno’s forward-looking mindset is a hallmark of U-M science and engineering and is shared by his Engineering school colleagues.

Dr. Line van Nieuwstadt is a good example of a professor who provides this forward-looking leadership and guidance to engineering students at U-M. Recently a visiting Research Scientist at AOSS, she is now Associate Professor of Engineering Practice at U-M Dearborn. Van Nieuwstadt has been actively interested in Mars missions and involved with the Mars Society, sponsor of the University Rover Challenge (URC) at NASA’s Mars Desert Research Station in Utah.

She is also the faculty advisor to the U-M MRover, a “student-run, multidisciplinary organization whose mission is to design, build, and test a rover for the exploration of extraterrestrial environments and to assist astronauts on a mission to Mars.” The MRover team works to compete in the annual University Rover Challenge at NASA’s Mars Desert Research Station in Utah.

Dr. van Nieuwstadt seeks to inspire students to look at problems with a fresh perspective; to challenge current assumptions that many simply take for granted.
“I recently challenged the team to re-think the assumptions that go into the current rover design. I urged them, ‘The current design is a 25-year old system. Can you come up with a different approach? Why does it have to be rectangular? Why does it have to be a six-wheel device with a rocker-bogie suspension system?’”

In addition to leading and inspiring U-M students, Dr. van Nieuwstadt takes time
to speak at Ann Arbor area schools and clubs about the science, technology and engineering coordination and integration that is required to develop and execute a Mars mission.

“I visit many elementary schools as part of my personal outreach to inspire students,” says Van Nieuwstadt. “Students are so excited to hear about the programs, and they want to hear all about Mars.”

WHAT’S NEXT
Human voyages to Mars do not seem to be likely in the near future. Mars One has received much press about its plans to send a team to Mars, but critics are skeptical of its rigor and ability to execute. Meanwhile, SpaceX, with its Falcon 9 rocket explosion in April, is going through scrutiny of its own.

But that doesn’t mean there isn’t significant activity happening to prepare the way for these future voyages.

In 2016 NASA will launch InSight with a mission to explore the deep interior to understand the planet’s formation, and the European Space Agency (ESA) will launch ExoMars with a focus on determining if life ever existed on Mars.

The next mission on the calendar after that is Mars 2020, where U-M AOSS researchers will continue their involvement in Mars missions.

Mars 2020 will move us closer to preparing for human travel to Mars. According to NASA, “The Mars 2020 mission is a future rover designed to investigate key questions about the habitability of Mars, and assess natural resources and hazards in preparation for future human expeditions to the Red Planet.”

“Mars 2020 will be like the Curiosity rover with a different set of instruments,” says Renno. “It’s going to collect and cache samples. The main goal is to look for signs of bacterial life on Mars.
Germán Martínez is Assistant Research Scientist at U-M’s AOSS and is involved in designing one of the instruments for Mars 2020. Martínez is working with an international team of researchers in developing the Mars Environmental Dynamic Analyzer, also called MEDA.

“Mars 2020 will have several instruments aboard,” says Martínez. “One of the instruments, MEDA, will be a meteorological station that will be measuring the Mars environmental conditions. My role is to work on a thermal infrared sensor that will enable META to measure Mars environmental conditions such as ground temperature, air temperature, and the longwave radiation on the surface of Mars.”

“Working on a sensor to measure the ground temperature may not sound ‘cool,’ but it really is,” Martínez explains. “One of the main goals of this mission is to prepare for human exploration of Mars. In preparing to send people to Mars you need to know the meteorological conditions on the surface.”

The MEDA team is extensive. The principal investigator is based in Spain, and Martínez represents U-M as he works with team members from NASA, Johns Hopkins University, and Texas A&M. While other team members are developing other sensors for MEDA, Martinez is focus solely on the thermal infrared sensor.

Renno is also focused on the development of technology for these future missions. As a scientist who has one foot planted in rigorous academic research and the other in pragmatic applications of the research, Renno has worked with local companies to translate technologies into marketable products. “I’m very interested in the business side of research, turning technology into viable products,” Renno commented.

He is currently working with Dexter Research, an Ann Arbor area manufacturer of high-performance infrared detectors and sensing subsystems. Dexter Research customers include scientific research, automotive, aerospace, home appliances, security systems, and medical equipment. One of their products in development is a technology to detect black ice on roads or on airplanes. This technology is a direct outcome of Renno’s research related to Mars.

So, while there may not be a maize and blue flag on Mars in the near future, there is no question that UM AOSS and other engineering researchers, together with area companies, are playing an integral role in developing new approaches to problems that help rovers land on Mars.[/vc_column_text][/vc_column][vc_column width=”1/4″][/vc_column][/vc_row]